Meg McDonough (née Gianelloni) grew up in Havana, Cuba, and came to appreciate at an early age the diversity of dining in an international setting as the island cultivated not only its own flavors indigenous to the area but was also home to people from all over the world who brought their own food styles with them. The variety of dining options and magnificent restaurants were well known and flourished there up until the late 1950’s. As the family traveled throughout Europe in the early 1960’s, the added exposure to dine at some of the world’s finest hotels—The Stafford Hotel at St. James Place in London, The Grand Hotel in St. Moritz, Hotel George V in Paris, The Grand Hotel in Cologne, Madrid, and Portugal—provided an endless array of important recollections respecting service, quality hospitality performance and fine dining within a beautiful setting. Later travels took her to the family patriarch island of Corsica where the uniqueness of French-Italian-Corse ethnicities incorporated the wonderful aromatic flavors that are particular to this region well known for their outstanding wines and cheeses.

The family relocated to Manhattan when they left Cuba and it was there that Ms. McDonough came to appreciate the remarkable array of fine dining options within cosmopolitan settings. Impeccable service and the display of infinite gastronomic choices were a haven in New York City and became the framework which guided her career for the next forty years. Ms. McDonough started as the Secretary to the Dean at Harvard where she held a dual position as Assistant to the Director of the Kennedy Institute of Politics for four years. The IP, funded by the Kennedy Foundation, is the academic forum for newly elected congressmen / congresswomen to learn how to perform their duties in Washington. Also, Fellowships were granted to outstanding citizens in the fields of politics, journalism, and private enterprise. Her work involved working directly with the following: Professor Emeritus, historian, author Ernest R. May; Jerry Brown (former governor California); Martin Linsky (HUD); Doris Kearns Goodwin (academician & historian); Richard Goodwin (Kennedy Speechwriter/White House); William Cohen (Senator, former US Secretary of Defense); Barbara Jordan (former congresswoman); Yvonne Brathwaite White (former congresswoman). Additionally, she assisted the IP Student Advisory group headed by Walter Isaacson (former managing editor Times Magazine, CNN, The Aspen Institute); John Grosvenor, Jr. (former editor at National Geographic Magazine); Patrick Cadell (former National Pollster). Ms. McDonough (aka “Mary Ellen Gianelloni”) also received Manuscript Credit Notations in the Library of Congress: “Lessons” of the Past, Ernest R. May (1972); The Truman Administration and China, 1945-1949, Ernest R. May (1972); The Making of the Monroe Doctrine, Ernest R. May (1972); The Cybernetic Theory of Decision: New Dimensions of Political Analysis, John D. Steinbruner (1973).

A subsequent lateral promotion as Secretary to the Dean at The Harvard Graduate School of Design (GSD) proved providential for the worldwide scope of international projects brought in for the students and faculty alike. A visiting dignitary from the Aga Khan entourage, present for an annual design competition and student charrette assignment, led to her subsequent employ with the world-renowned and largest architectural firm in the United States – The Architects Collaborative, which was founded by Walter Gropius. She was Secretary to the President at TAC for over ten years (John C. Harkness “Chip Harkness”). Later years presented with subsequent placement in prominent positions in corporate America working with various presidents and CEOs. A mainstay of her duties always involved some form of catering element which provided her great latitude towards their full-charge orchestration – and an array of complementary references to add to her networking palette.

It was, therefore, a natural progression for Ms. McDonough to integrate her professional skills further when she was invited to interview for a position as Membership Director at the former Sarasota University Club in Florida. In 1990, she relocated to accept the job which required not only an on-the-job learning experience but also an introduction to work within a private club setting. She generated over 107 new club members within the 15-month term of her assignment. Club revenue jumped commensurate with the level of new membership.

Ms. McDonough went on to also become a licensed real estate sales associate and is a Realtor in the State of Florida. She completed her last four years before retiring as a Personal Assistant working with a prominent American family on their three sizeable estates in Sarasota. The main residence, a 28,000 square foot custom-built, Louis XV-style home, became the center of her operations under which the penultimate in fine dining and an appreciably upscale lifestyle commanded a unique position. The property, along with the formal household staff of 18, was considered optimally as a “small resort” and for which all operating procedures were accommodated as though it were a high-end boutique hotel. In 2008, Ms. McDonough undertook an intensive year-long course at the University of South Florida (Sarasota) and received her Certificate in Hotel Management with merits. As part of her research for the year, she conceived, developed, and marketed a hypothetical new hotel brand which included the formulation of a collection of independently operated boutique hotels with two properties—one by the Bay, the other to be located within the business district of downtown Sarasota.

The impact of this course of study, and eventual accreditation within the hospitality industry, became the impetus for the creation of Ms. McDonough’s consultancy efforts via Luxury Hospitality Consultants LLC. 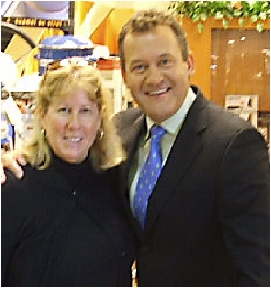 Meg McDonough with Paul Burrell (former Royal Butler to Lady Diana, Princess of Wales) at his book signing for In The Royal Manner.